Being a tiny mouse in big medieval world with sneaking, running, collecting things and stealth to get free and unveiling secrets along the way. Seeing first gameplay videos of Ghost of a Tale I was jealous, because the game was released to PC that I don’t own. But, wait no more! the game had finally found release date on consoles and I couldn’t be happier.

As the game started I was fascinated the looks of everything and how interestingly the story began; I was a mouse Tilo, who was thrown into jail. He had no memory what had happened so he escapes. With sneaking and stealth he gets out.

Ghost of a Tale begins greatly and it hooked me instantly. Being developed mostly by one person, Lionel Gallat, makes me wonder how a man can create this vast and wide-ranging game.

Tilo wants to find his beloved in a medieval keep that holds places like jail, courtyard, towers, sewers, catacombs, forest he needs to uncover on his way. Things get comblicated as he meets other inmates and rats that needs favors before helping him. Many doors are locked and mean rat guards pacing everywhere.

I like how the story is kept simple and not any complicated scenarios were presented. As Ghost of a Tale whole theme is medieval, so are the lore and places. The story of the world, history, legends and persons fills players’ knowledge of the outer world of the keep, filling the fantasy.

Ghost of a Tale is an RPG game, but lighter version of it, as it not contain any combat. It has some resemblance of Witcher games, but just a little. Gameplay is simplified version of regular role play game as it doesn’t include complex upgrading, armory, fighting, item and control system. It suits the whole game without making it any less emptier. The main thing was wearing right outfits on certain situations and skills that can be obtained throughout the game. As the whole game isn’t extremely long, nothing gets repetitive or boring. All the new areas were interesting of having a certain theme that somehow remeinded me of platform games.

I didn’t have any issues with the controls or their layout overall, only little issue was getting stuck on a pixel little too often and too slow prosess of taking healing items.

Things get interesting at this apartment. The graphics had certain looks that made them beautiful, but the other technical things gave me nightmares. The blackness and shadows

looked like burned and colours around them, too. It was unpleasant to play when going in dark places. I’m not sure is that just my TV or what.
In the settings was an option to use V-sync as such: On, Off, Half Refresh. I tried them all and playing this on PS4 Pro the game had major issues with them. ‘On’ had very low fram rate and much of lagging. ‘Off’ had the best frame rate and game ran almost flawlessly. ‘Half Refresh’ was between those two. In the end I played ‘off’ as it was the most comfortable one.

The colour scheme had stoic looks; the important objects and collectable items were hard to distinguish among the surroundings as they didn’t have any highlightings and stand out. This actually made the game more realistic and making player to take careful look around.

I wanna say something about the Photo Mode of Ghost of a Tale; it’s amazing! At least for me. What made it special was the fact that I could literally go anywhere I wanted and inspect surroundings as I like. Through the walls, out of the gaming area all the way to the very end wall of, the Truman Show, the whole game. It was interesting to see everything like that, but it also made me cheat a little. When I wanted to know what was behind the corner or inside some locked room, I simply just used my third eye. I’m not sure is this a glitch or intentional, but I only cheated when I absolutely needed to. I think this should be adapted to all games and make player to choose whether used it for cheat or not. But having it mostly to inspect places and see how some stuff was made into the game and so on.

The music of Ghost of a Tale is usually nice piano, but when action happens it turns into the movie scene. This piece was no voice acted at all and I think it wouldn’t necessarily add any value to it if it would’ve. Sometimes voice acting can be overbearing and getting annoying if the NPCs keep repeating the same line all the time when you try to ask something. 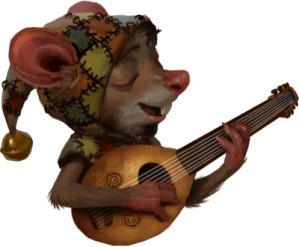 The game starts with no option to choose difficultiness, so I played Ghost of a Tale as is. It was no hard to get started and understand the gameplay and mechanics. Knowing what to do or where to go was hard to understand sometimes, even when I knew the mission. Even the map was somewhat useless as it only shows one floor and it didn’t have any other options in it, but the playing area isn’t that big and easily memorizable, though. All the missions were explained and the Quest portion in the menu was muchly helpful. The camera, in other hand, was very bad in tight spaces or in certain areas.

Ghost of a Tale isn’t hard game in any aspect as it didn’t contain any combat, other than throwing stuff on enemies head to make them unconscious. All in all, the game was only mildly difficult.

It’s the visual looks and idea that makes me love this piece. There is something that reminds me of platform games, it’s not a bad thing at all. Ghost of a Tale is light take of role play games put in a wonderful world of fantasy and lore. Made by (mostly) a one man is mind-boggling how much a single person can do, which is very inspiring. The game did have some little flaws, but it just shows that we all are human. Or a mouse. 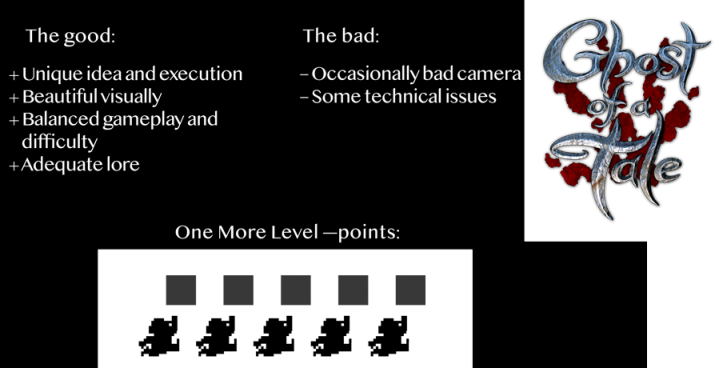