I heard Pikachu can talk in the latest Pokémon movie. I was astound by that and then I heard he can also talk in the latest Pokémon game Detective Pikachu.
I had to try this game, alright, and when I popped the cartridge and heard his voice; I was baffled about it. Pikachu has voice of a middle aged man who is slightly tired all the time and kinda grumpy, too, at times. One thing that struck me like a thunderbolt was the fact the game didn’t use 3D-effect at all!! I didn’t know this. After thinking ‘is there something wrong with my 3DS screen?!’ and then reading little print on the back of the game case ‘Note: This software does not support 3D image’. 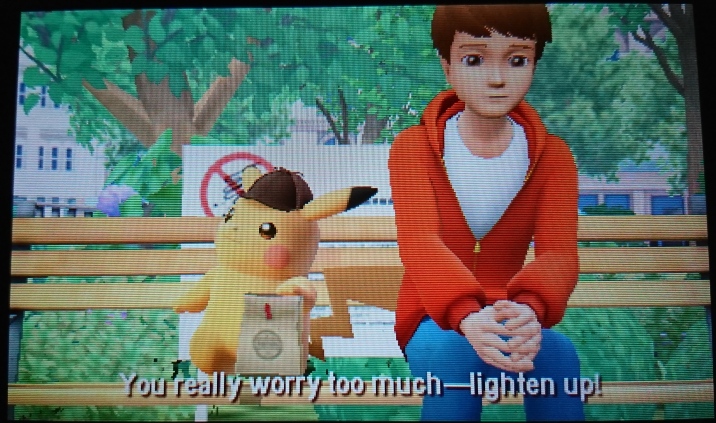 Story that started in the 90’s

The story is little bit bizarre and in the end it was even more so. A boy named Tim goes to see his father Harry but he is nowhere to be found. Tim and (Harry’s pokémon) Pikachu bump into each other in a street. There starts weird relationship between Pikachu and Tim; Tim is only one who can, somehow, understand what Pikachu is saying i.e. he hears the middle aged man –voice.

They start off by searching Tim’s father but the case gets more and more people involved and even a mysterious substance called R that can affect to a pokémon the way it becomes frantic is involved. Ultimately the story is about the Tim and Pikachu trying to find Harry and finding who is behind this horrible R substance… and why super rare pokémon Mewtwo is involved with this? 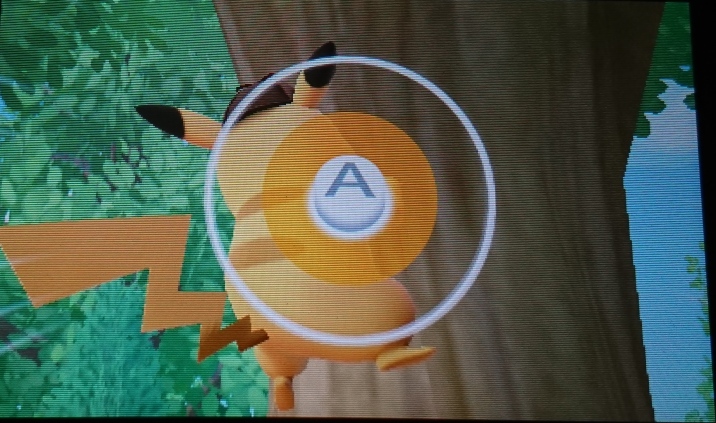 It doesn’t get any easier than this. Basically you control the Tim, use pen (or finger) to move objects on touch screen, do random prompts, talk to people/interact with the surroundings and talk to Pikachu.

Usually player is in a certain area and there is clues to be found to reveal the truth/secret behind some incident and after solving that you move to another location.

I’m not sure why this game wasn’t included with 3D support. The game looked good — and thinking that might be the cause of it. Looking good takes a lot processing power so the image can’t be done to 3D without sacrificing the graphics, which they obviously didn’t want to do.

Everything looked smooth and pastellic. Very childish-like and simple. 3DS upper screen isn’t super sharp (800×240) and any too detailed object would vanish. Everything had to look big, bold and simple. I have to remind I played this with 3DS XL (playing with other 3DS/2DS handheld might have different image quality due to the different screen sizes).

Sound of a thunder

I used headphones at times but mostly I played without them. I also used the surround setting on in my 3DS. Either way the sound was very good. The voice acting was OK.

Yes. No. Wait a minute. It wasn’t hard to do things but the hardness lied within finding them i.e. finding the right pixel where to push A-button. It was mostly running towards the set pieces and hoping you’ll get a hint.

In the beginning the game asked what my preference is. I said it’s none of your business and then chose not to take the ‘Easy mode’ that allowed me to have more hints. I really recommend the ‘Easy mode’ if you don’t have patience at all.

The problem of adults playing children’s games is the way we think. Every time I overthought the cases and thought the most logic way, but then the answer/solution was super childish and simple. Yes, very that.

I played Detective Pikachu very long time. I played it every time I had free time so it took long for me to complete it. I liked it maybe to the half way but then it started to annoy the hell out of me. All the solutions and answers were plain stupid and it was very slow phased that it bored me to death. I’m admitting that I looked answers to many things online — in a kids game. I wonder how children are taking this? Maybe they love it and everything seems perfectly logic to them and they’ll have mood to play it because of the middle aged talking Pikachu?

The saviour of this is the story. It’s sad that the slow phased gameplay spoils it. What let me down was the end, though. I wasn’t sure about it even though everything seemed very obvious from the get go, but still it managed to leave the story open.

This what I have to say about Detective Pikachu. Disappointed, surely.

‘Note: This software does not support 3D image’ 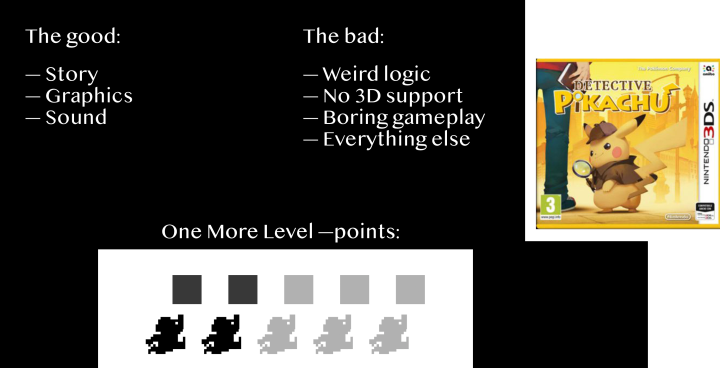