The first choice is someone’s last

Is human better than anything else in this planet? In this whole universe? What makes us human — what makes us conscious? What is consciousness, where it is and what it is? Does every living thing have it? Can it be learnt, built? I could ask these kind of questions all day but I’m human and I don’t have time.

Developer Quantic Dream’s, that is responsible of Heavy Rain —game, newest installation Detroit: Become Human questions these types of deeper thoughts and that is a good thing. As of a human we should make strict rules now for the safety of the future, because we all know androids are peeping us from the future, waiting us. We can surely build one sometime but do we really know what we are creating? Is artificially built consciousness fake and ours isn’t? Who gave us the right declare to be… alive? Bedtime story of the weird future

It’s Detroit, year is 2038, there is 53847 different bathrooms for each sex, I’m 51–years–old (and probably living in a mental asylum), humans have built androids as for commercial and labor (slave) use. They look like humans with only difference being a LED in their right temple. U.S. unemployment rate is at ultimate high; over 35% and humans have gone riot for a reason.

You’ll play with three different androids; a police investigator, a housekeeper and with a personal assistant. They all ‘live’ in different environments; rich, poor, average.

The story starts with you trying to save a little girl who is held as hostage by their family android. This is very first time when an android have attacked a human (killing the girl’s father) and acting violently.

Then we see the housekeeper who has to break her strict computer coding to save yet a another little girl from her insane father.

Lastly there is the personal assistant who lives in a manor with a disabled rich artista who has treated him like a son and trying to make the android to ‘feel’ like a human and building up a human-like consciousness. Soon when the old man is in trouble and the loyal android has to make his decision of ‘what to do?’.

All these androids has lot to think and minds to make. The story goes on as you make the choices and any character can die in a millisecond. The story is very intriguing, thoughtful and deep. There isn’t much I can tell about the story itself for not spoiling anything. But if you get the concept of this game the plot should be very easy to understand.

The gameplay and controls are very similar to the Heavy Rain —game, but with this there is huge leap to the betterness. The character is still wonky and awkward as hell… or maybe androids in future are very stiff? Whatever the reason is it frustrates especially when you’re in a hurry or there is a time limit of succeeding in a mission. Couple of my mission even failed because of this. The camera angle changed to weird position after doing a prompt so I couldn’t readjust myself quickly enough and the mission failed. In other time limit mission I went completely wrong direction because the camera angle showed me the wrong way. There is no going back after your choices — if mission fails, it fails. 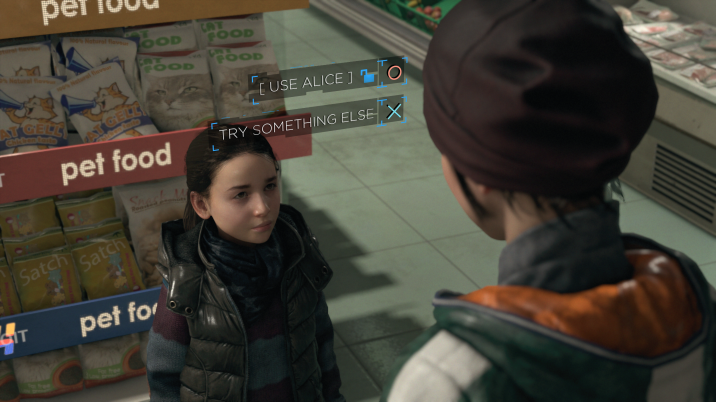 Graphics of an android

Detroit: Become Human looks gorgeous. Everything is very realistic and smooth. This game is ‘PS4 Pro Enhanced’ and it shows. I’m sure it will look beautiful with PS4 —console, too. Characters’ skin is lifelike and you’ll see lot of it due to the close–up face shots. Environment is gorg and I like the blur effect that comes to objects too near or too far. It will eliminate of seeing things too closely i.e. pixel mush, which would absolutely break the illusion of the realness. The facial expressions and lip–syncing could be better, especially the lip–sync ‘cos it was as bad as a drag queen who doesn’t know the lyrics of the song (I’m looking at you Valentina).

HDR–support is one of the best I’ve seen to date on PS4 Pro console. Almost every other game I have had problems with HDR for not working correctly, with Detroit: Become Human I couldn’t find a thing to say other than it works like a charm. Colours, brightness, contrast, gradient, depth… all of it gave a huge boost to, already, stunning graphics.

What was that sound? — It was android demanding things

I was disappointed of Detroit: Become Human not having own settings for any Sony wireless headsets. Everything sounded good but with the customize option it would’ve elevated the realness a notch. It’s like Marilyn Monroe without a beauty spot.
Voice acting is as real as it gets and it’s meticulously done. The ratio between music and voice was well balanced. It’s very common of video games (particularly the older games) to have ill balanced sound. Some games has sound settings that allows you to change the value of each source and in every game I always take the music/background music down to 70%. With Detroit: Become Human I didn’t need to do anything.

Difficulty to even understand

The game let me choose one of the two options:
Casual: is a story focused difficulty with simple controls that are much more forgiving. In the Casual difficulty, there are fewer chances to lose a character due to decisions made.
Experienced: has far more immersive gameplay with advanced controls that players of Quantic Dream games will be used to. It’s a fair challenge, and mistakes can easily mean losing characters.

I chose Casual since I’m doing reviews point of view of ‘an average player’ but soon I discovered it being too easy. All the prompt were the same and boring. There was no challenge at all. Thankfully I could change the difficulty setting to Experienced and then it seemed more balanced, actually. The controls/prompts were various and surprising. It also included shaking, tilting or jerk the controller. (I personally DON’T like using any kind of motion controls. It’s just PERSONALLY not for me e.g. Wii.)

I can’t say Detroit: Become Human is hard game. These types of games are meant to everyone and that’s why the controls are simple. As of a difficulty, of Experienced, I would give 5/10 (ten being hardest) as a gameplay aspect. It surely becomes harder towards the end where I needed to do quickly various prompts/QTEs and the camera was shaking like a crazy so it was hard to see them. As you know this game contains many variations of all situations depending what you answer, or manage to answer/do, and it seemed to be very down to earth of how many different variations there was in each chapter. But towards the end there becomes redicilously many different variations and solution that doing them all will take tons of hours and lots of pens and papers for notes and plans. The last choice is someone’s first

My last dying wish would be to everyone live in worldpeace *throwing glitter in the air*. No but seriously Detroit: Become Human has good story and I think the story is more so of a topic starter and making humans (gamers) think our future. It also has deeper meaning and understanding us, humans, and how we function. How we treat each other, animals, ‘non-living’ things… All those questions I presented in ‘first impression’ could be applied here as well. The game won’t give you the answers but it gives you thoughts, opinions, energy to make the answers available to you discover for yourself.

Shortly, this story and topic overall is very close to my heart (brain actually) as I have read theoretical physics for years now. These issues need to be solved before we go onwards. It would be a huge mess in future when things are happening and same time they don’t have any rules.

I could go on with this conversation all day but my time, and yours, is on card.

With story and gameplay style like this it’s spot on balanced even though it felt extremely super linear, at times. The developer haven’t accused of the gameplay being something else, so maybe it’s their intention. As ‘an average player’ I found it being little bit too restricting and very movie-esque feeling where I’m almost just a viewer who had to do useless and stupid prompts as the character moves on. With awkward controls to beautiful graphics with beautiful sound and finally landing on a thoughtful story this game is a gem and should be experienced.

If you got time, some money (approx. 59€) and willing to dive deep I suggest you to play this and make the best out of it. For once, a game that has a lasting affect to the player long after the game is over. That is something what every artist wants.

Detroit: Become Human doesn’t have any levels, but if it would I would play all of them (but maybe skipping few).

The story goes on as you make
the choices and any character can die in a millisecond.