Me playing PSVR games has been little low lately, mainly because there hasn’t been anything interesting to play. As Astro Bot Rescue Mission was announced I knew I had to play it and even though it was published couple months ago I managed to play it just recently.

Very first impression was how sharp and clean it looked and how smoothly the game ran. I was sure I’ll have some kind of motion sickness or other uncomfortableness as I haven’t played any VR games lately and for my surprise I didn’t have any issues. This must be the very first PSVR game that didn’t feel anything but comfortable and that was why I managed to play this whole game in one sit.

Astro Bot Rescue Mission is little story of a Playstation 4’s little minions that are usually used in console’s demos or launch PSVR titles made by Sony (or in the launch of PS4 console as they were used to show how DUALSHOCK 4 worked.) This time these Astro Bots are attacked my alien ship and their bots goes missing in different planets. Their spaceship also gets damage and so you go to the mission of finding all the bots and missing spaceship parts.

Gameplay is very much like some Super Mario 3D Land (3DS) as are the controls, too. Astro Bot Rescue Mission is very close to be Playstation’s own Mario game and I like that. What is needed to do in every level is to collect as many bots as I can and usually they’re hidden somewhere and with little “help me!” voice you can try to find their location and then figure out how to get to them. Other thing is these coins you can collect and they can buy you some extra stuff in to your spaceship that are just collectables and not anything that can be used in the gameplay.

Controls work very well and very minimalistic as just run, jump, hit or use an item that are given to player in each level to use. What bothered me was how I couldn’t go backwards as once I went onwards. It was very much like the first NES Mario games as player could only go one direction. That was something I didn’t like and when I realized I missed something I couldn’t get it anymore without starting the whole level again (as there aren’t any other free camera movement than literally moving your head.) What was super duper weird was how there wasn’t ANY KIND OF OPTIONS for anything. Personally I didn’t feel of needing any options, though, as this game is very precisely done correctly.

Astro Bot Rescue Mission is smooth, sharp and runs like a butter. This has to be one of the most gorgeous PSVR games out there. It’s not maybe the most realistic-looking, but most sharp and smooth. The level design is my favourite thing in this game and the boss-design as well.

I usually don’t want to compare other platform/console games with each other as I think that’s very much what the developer/publisher do not want, but as of reviewer I want to get the reader the most precise picture what I try to say or how some game felt like. As of comparing this to Mario games so is the audio as well. The background music to sound effects reminded me of that saga.

Astro Bot Rescue Mission don’t have any difficulty levels so it is what it is and I like how balanced it was. Of course towards the end, levels got harder, but I think any average player can finish this with smile on their face. There was merely couple spots that got on my nerve but that’s it, every other way I like how this is put together. The bosses of each world wasn’t difficult but tactical, meaning, that they had their own way to be beaten and not just hack your way through.

Other difficulty that came to my mind was how you have to move the bot around 360° view by sitting in one place. For me I don’t like to move when I play games, I like the VR thing, but not that I have to stand or move around like a maniac as it feels uncomfrotable to me. Astro Bot Rescue Mission makes player to move head around 360° and trying to move the tiny character and it gets lost very easily.

I can easily see myself to play this game many times over. The re-playability is high as this is very enjoyable game. Every level had own design and style that made the game so variant that I didn’t had any dull moments. Astro Bot Rescue Mission is kinda short, but a game that many indie studio should take note from how short games should be done. Being 39,99€ game I think it might be too salty prize if you want long game, but as of quality over quantity this is almost worth it. I personally would pay this 29.99€ as launch.

If you still hesitate to buy this you should try free demo that is available in the PS Store :) 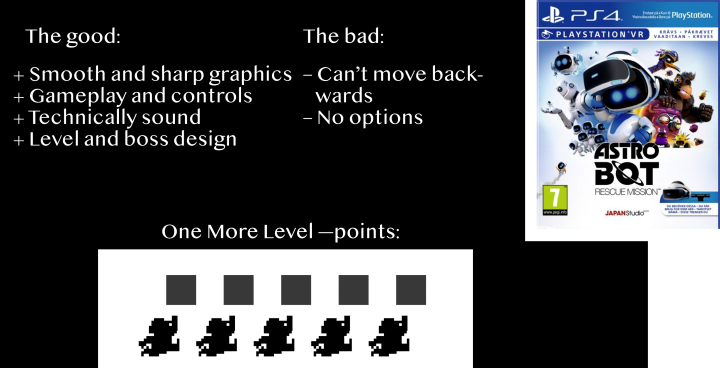