EQQO is a mysterious acquaintance to me. It’s inspired by Ethiopian mythology and architecture, the poetry of Ghibli animations, works of Fumito Ueda (video games Ico and Last Guardian). EQQO is poetic, narrative, “360-cinematic”, puzzle-adventure game, based on its original VR-version on other platforms.

EQQO is a love story to the nature and everything that connect us (looking at you Death Stranding). Story of two foreign creatures to each other; a blind boy and an Egg, that is as fragile as it’s essential.

Wow, that was a mouthful, and I’m excited to see what this peculiar video game is all about. It’s made by indie developer Parallel Studio that was creative team behind video game White Night.

Which came first; the snake or EQQO?

Eqqo is son of Seada, a woman who is looking for him. Eggo got missing one day and ever since Seada been looking for him. He was imprisoned, but got away and now he wants to find a way home.

It’s difficult to explain the gameplay of EQQO, because it feels like player is the mother (Seada) and she helps her son, but being some kind of invisible floating entity. Eggo is blind, so player have to click the spot where he then goes. This invisible force (player) can’t do just anything, only certain objects are movable. Player have to order the blind boy to do things and together they can solve puzzles.

It was very easy to order Eqqo and he didn’t need exactly appointed route, he rather found his way quickly by himself. Very beginning the boy finds a big egg and he carries it along the whole game. The egg is used to solve puzzles and open pathways to the next area. The egg was important, because it held the seed of life. 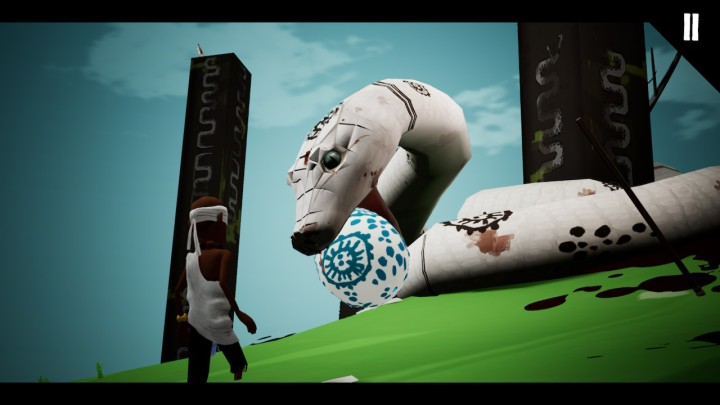 The camera, movements and looking around is plain horrible in this game. Player can only be at certain spots and look around from there. The camera always moved awkwardly and often it jumped somewhere or did 180°. Same happened when I tried to grab an object and move it. Also, the game uses too strongly a blur effect, where objects too front or too far are blurred. It didn’t work correctly, blurring everything randomly like crazy. All this was painful to endure the whole gameplay.

Visually EQQO looked OK. I think the story was the most important part, with the puzzles and the happenings.

In the end, I liked EQQO even though it had the most horrible camera system ever. It was something different and the storytelling was nice and mysterious. Mostly I liked the tense situations, where I had to be quick and play smart to order Eqqo and solve puzzles.

EQQO is surprisingly in many European languages, even my language Finnish, which is extremely rare in video games. The game is about 4-5 hours long, with a price of 6€, it’s a truly a bargain.

“The egg was important, because it held the seed of life”