S.O.N is a pshycological horror game made by studio RedG Studios, being their first title. I do fancy horror games and, of course, this game was a title I had to try. All the gameplay videos and images I’ve seen of S.O.N looked creepy and scary—I wasn’t sure, though, would it live up to its promises.

When I started the gameplay it simply just… started. I was in middle of a creepy and dark woods. The story itself of S.O.N tells about a man, Roberts, who goes to the forest to seek his missing son Jay. The forest is known as South Of Nowhere, where countless people have been missing.

As I went through the woods and caves and many other places the story was told by words or short phrases written to the walls with blood or bright neon light. The words were from his past and things he had done, making him feel guilty. The main character doesn’t talk anything, but I could feel the oppression building on him (me). I think I got the full story, not just from the words on the wall, but the places, objects, things around me and puzzles I had to do. S.O.N is first person horror game without any flashlight, health, stamina, inventory, etc. systems. I liked how vulnerable it made me feel and it built up the horror-survival ambience. I could walk, run and take few objects like keys to open up gates to get another area. Some areas had puzzles that, looking now, were kinda simple, but playing this extremely oppressing game, everything feels hunderd times harder. I noticed there wasn’t any settings of controls, since the running was made by keeping pushing down L3, which was kinda awkward. Having simple controls and gameplay, I really have not much to say about it, other than everything worked as they should be.

Blood everywhere with pieces of human bodies, bones or spine certainly looked disturbing. Graphics was overall good and very detail-oriented, which I liked. I could read notes or inspect kids drawings that told more of the story. The game is very dark, though, but the option had two settings and one was brightness that I had to turn up a bit.

This is something I have to give full points to the developer. Using headphones and listening all the sounds it sometimes felt someone was really coming for me or just behind my back. The background sounds sometimes changed the way that I really felt running away, and I did. With all the weird sound effects all over with all the things what was shown visually made everything creepy, that I screamed at least five times. S.O.N is obviously made to be played with headphones and I also recommend that. 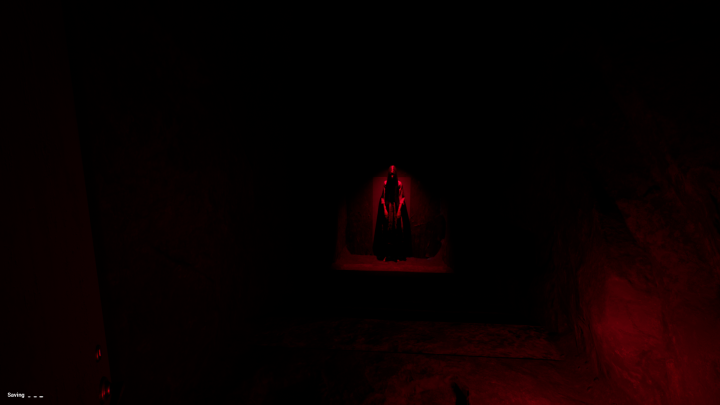 Everything feels much harder when you’re tense. S.O.N makes everything harder with all the visual weirdness and superb sounds. I think the only difficulty in this game is trying to go onwards easily. I was afraid all the time that someone is going to jump on me, but that didn’t happend, at least on my first gameplay, though. There were choices I could make and places I didn’t visit, so playing this again should be done.

S.O.N is not complex gameplay-wise and for horror lovers I must strongly recommend this. The game isn’t overly long, maybe 1-2 hours, but if it were longer the magic of ‘someone will come after me’ would drain down and player gets used to everything visually and soundly(spelling?), making everything less and less scary. S.O.N has perfect length and content. Being first game from this indie developer, they have done really good job. 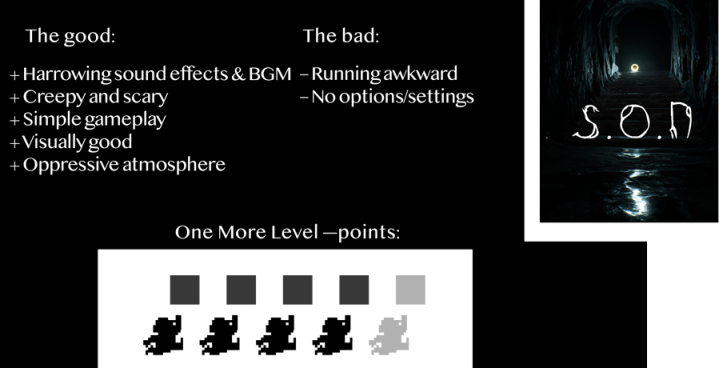