(This review is of The Blackout Club press release 1.0. provided by the publisher)

I’m not the most familiar with online-multiplayer games and generally I never play them. The fact that I don’t like people on internet and in the multiplayer-world, since they tend to be unkind, not following the rules and whenever possible to annoy others by using bugs and errors to their advantage— or basically do anything that kills the good moods for others. The Blackout Club was on my gaming list, though. Simply because the settings, story and gameplay sound promising—and it had some type of single-player mode. Sadly I had to play this all by myself and the multiplayer feature is something I can try after this game is fully out.

Redacre is a remote town with no internet connection or mobile phone signals, making contact or ask for help outside of the town impossible. Player is a young teenager who tries to figure out what is happening in the Redacre at nights. It seems every night you and other teenagers have blackouts and do things with no memory of it. Your friend is now lost and some mysterious people are after you. The only hope is to record these strange things on camera and send them to outside world.

The actual story is told in the tutorial. It dives right into the plot and the environment of this mysterious town. When playing the missions the storytelling is very limited and it doesn’t flow at all. Everything in the beginning tutorial was great and intense, but after that it simply vanishes. 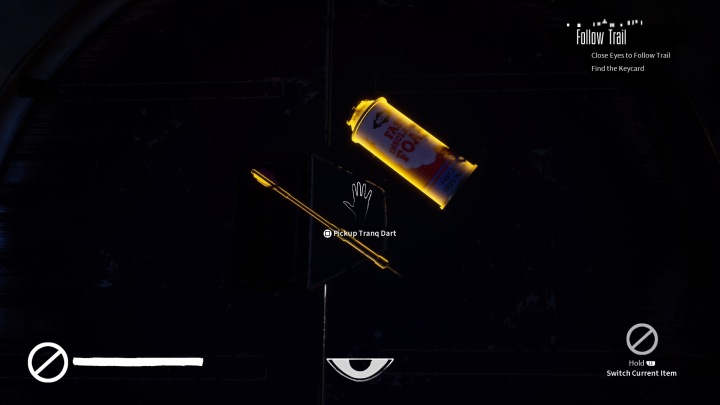 The game works by player either playing alone or with friend(s), or randomly with someone(s). I had to play this alone since there wasn’t anyone to play with, since this game wasn’t out yet. It soon came clear The Blackout Club was difficult to be played alone. Player always starts in the headquarters (abandoned train cars) where player can upgrade powers/skills, buy/change apparels, choose a weapon, read tips how to play… everything that needs to be done before mission happens in the headquarters. Even when this game contains so many things they all felt unfinished and not well-thought. All the skills took too much time to be upgraded and many of the weapons I never even used. The progression system overall was surely lacking. The missions were always repetitive and didn’t have any lasting effect to the area. It felt like I had to just do something that hadn’t or had just little to do with the story/plot/settings itself, then come back to HQ and do another mission with the area reseted.

When on mission it was night time and player has to be careful not make too much noise, which was difficult to achieve. Adults were sleepwalking all over and even tiniest sound alerted them and they came after the sound, since they couldn’t see anything. What I had to do was to sneak around and do the mission without getting caught. If they caught me, I had one weapon in my hand that I could use, such as tranqulizing darts, taser, flashgrenade. If I didn’t have any weapon as the enemy was dragging me, I could try and reach some random item around me and use it as a weapon to free myself. With this part playing with others comes handy as they can help you and also distract the enemies. Playing alone everything is much more difficult. 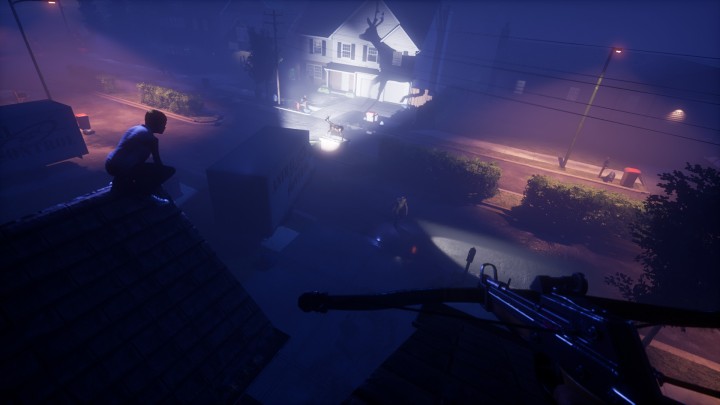 There were also cameras and drones that alerted these blind sleepwalking parents and enemies with a vision. Player have to be careful and aware of surroundings and use different tactics to overcome the enemies. If they weren’t enough then came the ultimate enemy, The Shape, who could end your journey right there if it caught you. It was mostly pointless to run away from it as it could appear from place to place and with all other enemis after me at the same time. All that felt like an ultimate punishment that was easier to accept than try to outrun.

What helps the gameplay was the ability to close eyes and see footsteps that always showed where to go (your mission’s goal) and when The Shape came, only by closing eyes revealed it, since it was invisible otherwise. Seeing the footsteps was great, but when in hurry or running, they appeared too slowly and I had to stop and wait them to be generated/loaded.

The controls were OK at least. I didn’t come up with anything major to say about them.

Everything I saw in The Blackout Club was OK. Nothing overly beautiful, mostly average. I noticed there were issues with the graphics alot, such as things popping up in front of me, quality dropped all over and drawing distance of effects (like shadows) were extremely short. All this changed graphics and visuals in front of me all the time and it was bothersome.

All the noises and voices plays important part of The Blackout Club gameplay. It was mandatory to listen where the enemies were, because usually they did the same things all over again and paced fast the same path continuously. The timing was always important and not to rushing in. The game has a optional system called Enhanced Horror System (you can read more of it here.) What I understood it makes player able to talk to the gods/spirits and the game listens/records your reactions or such. I wasn’t sure what it should suppose to do or add to the gameplay, though.

The Blackout Club isn’t the easiest game, for single-player at least. Being patient, making a plan, checking the environment, making sure to know where enemies are, upgrading skills/powers and taking correct weapons/items to the mission is the key. But, gaining exp. takes lots of grinding the same missions over again, making everything else (than getting the reward) pointless. I think this kind of grinding is extremely outdated system, it reminds me like some Pokemon game where I walk circles and wait for an enemy to come to get exp. points and do the same thing for hours. Players nowadays wants something lasting and having meaningful changes.

I played this all alone and it did get kinda hard, especially if I get caught there was nobody to help be. It was also difficult to try keep my interest up all the time, since the game was not very rewarding or making me pleased if I conquered a mission. I was mostly frustrated, annoyed and bored.

The settings, story and environment are bizarre and unique, and many aspects reminded me strongly of Stranger Things (Netflix series). Basically it’s like Stranger Things set on modern times, with sneaking and snooping, finding the answers to all these weird unexplainable happenings and trying to reveal everyone the truth.

Everything after the beginning tutorial just flops. The gameplay is extremely repetitive and pointless. Leveling and progression system is completely out of balance. Difficulty varies too much and many times it’s unecessarily merciless towards the player. Missions are mostly the same with anything player does in the missions has lasting impact to the game world/area. The graphics are just OK. Enemies and their AI isn’t great or balanced. The storytelling isn’t anything like in the tutorial and it was like the developer forgot it completely from the main gameplay. Heavily unfinished and untested feeling.
The only interesting part was the Maze, that went underneath of the town, because there were all kinds of weird and mysterious things.

The Breakout Club promises alot, but hasn’t polished or even finished feel to it. It has the same issue like I see in many games nowadays; it has great settings, idea and potential, but the execution kills it.

Review copy provided by the publisher