(Home Sweet Home can be played with PSVR and non-VR. This review is mostly of the non-VR experience)

Thai culture is interesting with all its religious beliefs; Thais are very sensitive when it comes to curses and spiritual world. I think many Asian horror related media, such as movies, are more scarier than the Western ones. I don’t know why— they feel crippling and usually the visuals are terrifying with atmosphere of unbearable anxiety. Home Sweet Home has been in my radar for a long time now, but I simply daren’t to play it. Even though it’s not packed with absolute gore, but the psychological-horror seemed too much for me with all the Thai myths and beliefs. Home Sweet Home had found its way to the PlayStation 4 and PSVR system, and I readied to give myself a sleepless night.

Tim seemed to live somewhat happy life with his wife, until she mysteriously disappears, leaving him to his sorrows. One night Tim wakes up somewhere else than his home and comes across with an evil female spirit that tries to kill him. He needs to find his way out, whatever and where ever this is.

The story in Home Sweet Home seems to be simple, but it goes from thing and place to another, that did threw me out of tracks couple times. It was also due to the fact that I felt relentlessly uneasy and couldn’t focus on the plot details when I was constantly afraid of something happening to me. I could find pages of Tim’s wife’s diary that told more details what she was feeling and what she was doing, opening the facts he was not aware of. I like how the story build up, even though it was sometimes little bit hard to follow, but I mainly blame myself for it. The ending was OK, leaving the game in cliffhanger for the Episode II.

These types of first-person psychological-horror games are usually pretty simple with the gameplay and controls. Home Sweet Home doesn’t differ and it was good thing, but sometimes I would’ve needed something else to fight back or deal with my enemies. That was also the one aspect that caused me anxiety; the feeling there is only one way to do things, when in nature I wanted to solve some things by other way. In the gameplay the player mostly do is avoids the spirits and basically everything moving, collecting keys/items to enter another area and do some puzzles along the way. Towards the end the gameplay started to feel little boring and the game began to lose its scary-aspect. What bothered me was the fact that sometimes I had no idea where to go and what is happening. I have to admit towards the end I had to watch little info online how to solve some things.

Controls were OK and worked fine, there were few little things I would fix, but that’s all. I also would add more places to hide/go through, because there were countless of places I could’ve hide and use for my protection, that was my only weapon and I think I should be allowed to use it fully.

Everything in Home Sweet Home looked fair, not great, but fair. I could see lots of blurriness and low quality in the surroundings. The character models also looked dated and I was little bit disappointed with all that. Also the wife looks completely different than the one in the photos in the game and I think that’s due to the fact this is localized to Western and they didn’t change the photos to match the character? Whatever the reason is, it shows the developer’s sloppiness.

Some parts looked nice and many Thai related objects were beautiful. This is always something that unsatisfies me; the big differences on the quality of the graphics from object to object. For an example I can say that all the photos were sharp and up-to-date, when some brick wall looked like N64-era. All the areas and buildings didn’t feel realistic at all, it felt like they were put there just to build a some kind of place for you run and hide.

I tried Home Sweet Home little bit with PSVR and it looked very much the same. 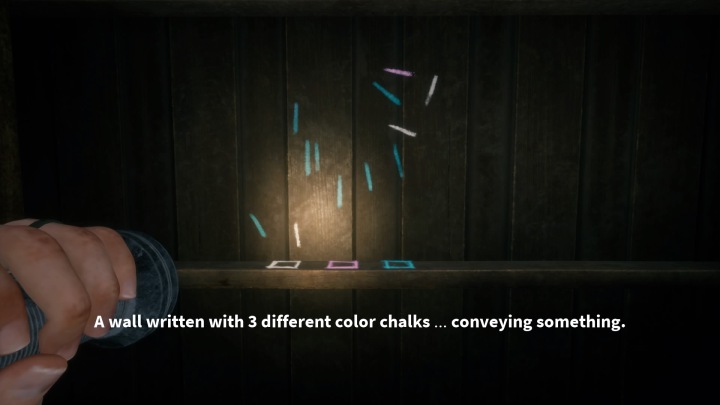 I liked all the sound effects, but the voice acting was somewhat bad. When hiding from the evil woman spirit, who walked around with carpet knife playing with the blade, sounded horrifying. Only negative thing with the sound effects were the bad localization. Sometimes I searched a place for nothing, until realizing the sound (of the object) is actually coming completely different place/room, when it sounded like the sound was coming in that specific spot I was standing. The woman with the carpet knife also sounded much closer than she actually was. It sounded like she was in the same room, right next to me, when she actually was in other room, much farther away. These kind of little things threw me off the tracks and wondering where all the enemies actually are and only thing was go and see, but usually then it was too late, when I bumped up against the enemy.

Even though Home Sweet Home isn’t very long game, but the fact that I was afraid to run or do anything quickly made the gameplay feel much longer. Normally it’s around 3 hours, but I saw someone playing this in 1,5 hours. I—in the other hand—played this around 4-5 hours, due to the fact that I was slow on my process on purpose. I think Home Sweet Home is easy with some parts and sometimes it was very challenging, making me think I managed to get through some situations purely by luck. Many things had to be timed perfectly and sneaking amongst the enemies without the knowledge of where to go or what to do. This could take many tries, because most of the time when I was noticed I let myself die than running away and hide, since mostly it was pointless. The puzzles weren’t difficult to solve and I think it was good thing, that they gave players some slack. What also was troubling was the bad AI of the enemies, that sometimes made me crazy. 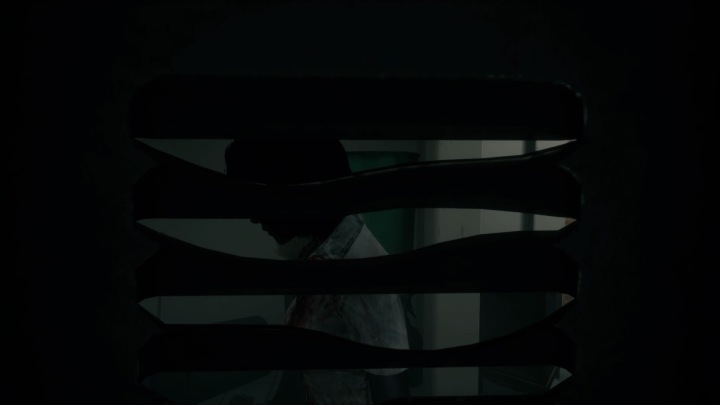 Everything in Home Sweet Home was decent, but it had somewhat unbalanced feeling; sound effect were great, but badly sourced. Graphics were nice, but only with certain parts. Player could run and hide, but half of the times it was pointless. Gameplay and controls worked, but were too strict and straightforward. Story and all the Thai myths were great, but the way they were presented was too little.

Everything had dated and amateur-like feeling and at this point in video game generation I expect much more. If the game is simple, then it has to shine with every other way and I think Home Sweet Home does not do that. It’s not bad game, but feels and looks old. The fact that this has VR option gives the extra point it needs and is something that brings this game (somewhat) to this generation. I have to give points for not leaning fully on jump scares to terrify players. Running away from the woman with the knife was propably the scariest thing in this game.

I’m very in-between with this game since it’s OK with some parts, but fails with the rest. Let’s say the overall quality wasn’t constant. To get the true experience, I think the PSVR is the way to go, but still all the negatives I said carries to there as well.

(Review copy was nicely provided by the publisher) 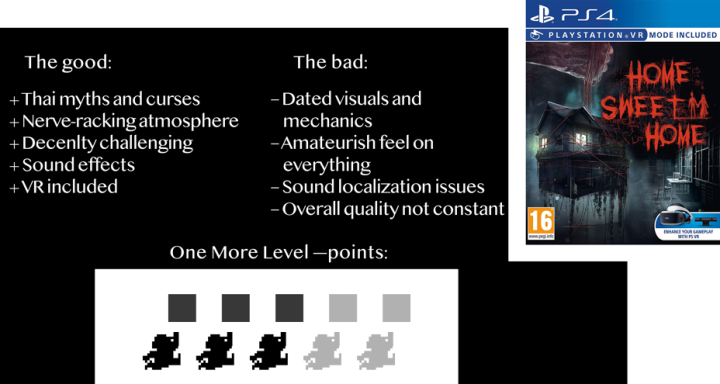