Silver Chains was a first-person horror game that I wanted to try out. It was released originally on PC back in August 2019, with medicore reviews. What I was worried about, was the fact how similar all these first-person horror games are. I understand, that it’s impossible to bring “something new” all the time, but the list of first-person-horror-walking-simulator-games is long. Hell, even main Resident Evil games are now first-person titles.

Does it look good?

Alright. The graphical quality of this game is clearly a mid-range PS4. I don’t use my PS4 consoles anymore, so I played this fully on PS5 (I believe due the backward compatibility and not with any PS5 patches.) Still, the game seemed dated, but it ran smoothly. I didn’t get any major frame rate drops, bugs, glitches or anything like that.

I have to add, that sometimes, the scenery looked nice, such like dark corridors with creepy lighting. Adding that neverending thunder outside with sudden flash of lightning gave me that eerie and horror atmosphere I was asking for. Actually, reminding me of those Resident Evil mansions.

Sound design and the story

I played Silver Chains using headphones and I suggest you do that too, if you want the ultimate creeps. The sound design was OK, giving all kinds of scary noises, what a typical haunted manor would. The game was voice acted, even though it was minimal, it was better than nothing.

I think the best part is the story, honestly. Because the gameplay and controls weren’t that good. The story begans of a man (Peter) waking up after crashing his car to a tree. He doesn’t know where he is and runs into the mansion afar. After fainting at the front door he wakes up inside the manor, lying on a bed. Then the gameplay actually starts and what I needed to do is to find out why I’m there, how to get out of these locked rooms, find the keys and secrets and with that the story unfolds little by little.

Even though, I could predict many things with the plot and it wasn’t overly surprising, I think it was decent enough to hold up the concept.

The gameplay and technical issues

What comes to the gameplay and controls. Well, the controls needs some adjustments, for sure. I can only speak this PS4/PS5 version I played, but it was frustrating trying to interact with anything. I had to be a precise position to interact with object in front of me, open doors or do basically anything. In a sense, it gave even more terrors to me, because I could imagine a person acting like this when they’re in panic. I mean, who wouldn’t find a simple task to be hard, when trapped inside a haunted horror manor? But, I do believe, all this is NOT intentional by the developer—that’s why I have issue with that.

What I really liked about the gameplay, was how I never was stuck at any puzzle or where I should go. Yes, I did have few moments I was confused what to do/where to go, but then comes the inventory-menu system, that always showed all the items, the latest writings I found or Peter’s thoughts.

I found it hard to tell some things about Silver Chains without spoiling or giving away good moments. The gameplay is also avoiding this monstorsity, The Mother, that will instakill you. Thankfully, she doesn’t roam free in the manor, she only comes at certain situations and only way to get her to go away, was to run and hide into a wardrobe. Then there were these creepy ghost children that helped me, in their own odd way, but just seeing a ghost child standing the other end of the corridor was just creepy.

Did you even beat the game, bro?

As I write this, I did not finish the game. The reason was the very last “boss”, which was difficult to beat. The reason to this, was not that it was something I couldn’t figure out, but the technical issues. One was the fact how hard it is to interact with anything and the second was the the technical aspects of the “boss” itself. I had to avoid it and get distance between each other to be able to do things, but the “boss” had zero AI and could see me regardless if I was hiding behind walls and objects. In other words, the “boss” had a clear line if he could see me or not. It was ridiculous, like a magnet that pulls you towards no matter what.

I tried my all to finish the game, but I only got 99% of it. As this game was provided to me by the publisher, I also got a walkthrough for it, and regarding to that, the game ends after this segment. (I went online and watched a Youtube video of PC gameplay of the ending.) 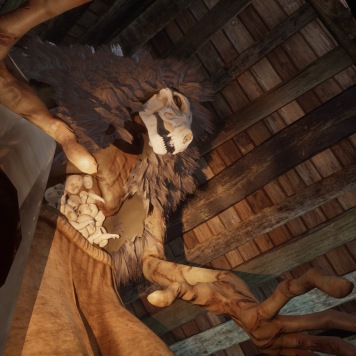 I did enjoy Silver Chains, but it seemed outdated and unpolished. I was scared of The Mother creature and the enviroment was creepy, but I didn’t find anything special about this experience. It’s a decent game, but be prepared it might have technical issues. It’s sometimes hard to judge games, because review copies usually aren’t even the same ones others can buy from the PS Store. So, I can only speak of my experience and the version of the product I was provided.

Silver Chains seems still be the medicore game after all these few crazy years (regarding to the PC reviews). The game is about 3 hours long and I like the fact it doesn’t start and leave you hanging. It’s a decent supernatural horror experience and if you’re fan of the genre, then I can suggest you to try this out.

Hanging dolls are always creepy, no matter what.”