Forgotton Anne literally starts with a lost sock. We all have them and we always wonder ‘where they end up’ but question no more!! Forgotton Anne tells you where all lost items ends up and what happens to them.

I saw some beautiful images of this game online and I liked the art style of it. I also read some previews and I thought I will give this game a go and, oh boy I loved it.

When I started playing Forgotton Anne I was captivated the Studio Ghibli —esque art style and somehow this reminds me of The Borrower Arrietty 借りぐらしのアリエッティ [Kari-gurashi no Arietti] N/A The Secret World of Arrietty. Everything looked very Japanese anime-like and I couldn’t take my eyes off the cutscenes that seemed to be drawn to a paper rather than made with computer graphics. I was impressed by that, but I still kept my guard up; you can’t judge a game by its cover.

I could write a story of all my lost items

Forgotton Anne’s story is hard to explain, but easy to understand after seeing it. It literally tells the story of lost goods that everyday people lose and have forgotten. They disappear and falls down to this peculiar world ‘Forgotten Lands’ where they becomes alive, and have a new term ‘Forgotling’, and then they are checked in and inspected what kind of job they can do. Some unlucky Forgotlings, such as a wretched sock, usually get some shitty job in a corner of somewhere.

Then we meet Anne. She is awoken an explosion and she quickly realizes that the premises of this weird world are attacked by rebel Forgotlings. She needs to stop them at all cost. Anne isn’t only human there; she has a mentor, Bonku, who also rules the world and guides her.

The story goes on from there and she has to find the rebel leader and stop the destruction of this weird downside world by all means necessary because everything isn’t as it seem and the rebels have no idea what they are causing. As the story goes on she meets new Forgotlings and have new enemies and friends and ultimately finds pieces of truth about everything. Through actions and choices player makes their own fate. But the real question is; why Anne drop down to the Forgotten Land in a first place?

Forgotton Anne is sideways 2D–3D game that is something I don’t, usually, like much nowadays. It was popular in the 90’s when 3D games haven’t taken off due to the lack of hardware and consoles that could run them. It has recently come to my attention how many 2D sideways games are emerging all the time and the pixel style with it is very popular, too.

Forgotton Anne is sideways, but still it has depth. Controls are very simple, but yet Anne moves very awkwardly. It almost feels like the delay of giving a command is 0,5 seconds, and that’s a lot. I don’t know is this intentional or what but it distracts in the beginning, but I got used to it pretty fast.

The player also has to make choices when talking and dealing with Forgotlings and situations. The story somewhat changes as player make these decisions, so choosing wisely is the key because who knows what lies in the end?

I wouldn’t say this is just a 2D platform, because it’s much more than that and besides, there isn’t death pits where players can fall since Anne can’t die in this game. There are moving platforms and technique to be utilized to get by jumping or solving puzzles. Gameplay is overall easy and low phased and more puzzle solving than platform jumping.

Graphically, this is a beauty, especially all the characters that seemed to be drawn by pen to a paper. Every move they make is drawn just like it would have been done in an anime. Studio Ghibli and Hayao Miyazaki‘s [宮崎駿] works are the closest I can refer this to visually. There is a certain type of harshness and softness in the graphics and all the characters are corky and oddly funny — just like me.

Can a sound be lost, too?

All the characters can talk. It literally brings them alive and the voice acting is done like in any high quality anime. All the other sounds around the player is lube warm. I would’ve liked more immerse into it and use of 7.1. surround sound. I know this is a 2D game, but that’s the point; it would’ve elevated the feeling of 3D that would bring another dimension to it. I had to change the audio to stereo in my Sony Wireless Headset to make the best out of it.

Difficulty to find anything difficult in difficulty

The only difficulty is the little bit awkward and slow controls, and of course some of the puzzles. In the beginning the puzzles are rather simple, but they gradually become harder. I didn’t find any puzzle to be overly difficult but just one. If you are anime lover, but don’t play games or don’t know how to play them; I strongly believe you can play this, though. This doesn’t need super nerd player skills to be enjoyed.

Forgotton Anne is a Japanese anime–style beautiful story with choices to make that’ll shape your fate. It’s not a Heavy Rain/Detroit: Become Human —like, so don’t worry. It’s merely a small story of self discovery and truth that is hidden in a plain sight.

I love this game and I would like to play this kind of games more. Video games doesn’t always need to be the most realest visually and story–wise, and 30h long. They can be just like Forgotton Anne.

But the real question is; why Anne
drop down to the Forgotten Land in a first place? 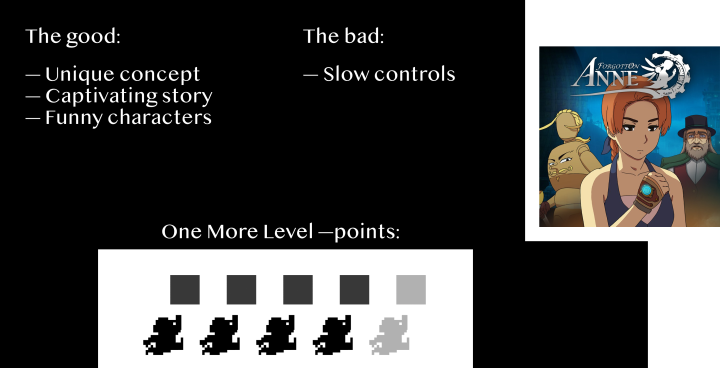