Resident Evil 2 must be the most anticipated game for the beginning of 2019. It was announced back in 2015 and the fans rejoyed as they could play one of the most sold Resident Evil game totally remade. It might be little confusing as the remake wasn’t named as ‘Remake’ and this is because the developer said it being completely a new game. The story, characters and places are mostly the same, but this is a new take of the classic. I tried Resident Evil 2 demo couple of times and I liked it, but it had some flaws such as the HDR not looking so great. The problem was that the demo was only one 30-minute try (I managd to play it couple times, though) and I didn’t have time to go through the settings. Even so, it left good taste in my bloody mouth and I wanted more. Comparing to the original game this one have pretty much same story, but it has many new places and many aspects were used differently like the beginning how Leon and Claire met, newly designed scenarios, new enemies… many things have new perspective, but the same idea.

The main plot is of two characters Claire and Leon and how they go to the zombie infested Raccoon City. They accidentally bump up each other, but got seperated quickly and they decided to meet in the Raccoon Police Department (R.P.D.). They still have many things to do on their way and meeting each other comes more difficult task than expected. Along they way Claire meets a young girl Sherry and becames her guardian. Leon, in other hand, meets a mysterious FBI agent Ada. Resident Evil 2 has other interesting characters and it becames evident that some of them have something to do with the zombie outbreak, but what Claire and Leon wants; is to get out of the Raccoon City.

The story is altered from the original one quite a bit and it was expected as this being a new take. Other reason must be that if this would be 1:1 remake the game would be very short, and it wouldn’t offer anything new and interesting.

How everything was portrayed in the beginning felt like the developer expected every player to know the original game. There are many players who haven’t even seen the original, or any other Resident Evil game, and they should deserve good welcome to the horror show. In the 90’s Resident Evil games (and some other Capcom’s classics) were played with so-called ‘tank controls’ which didn’t age in any other direction than to death. I’m pretty used to the control scheme though, but it was very clear this new version wouldn’t have it.

The game is played over-the-shoulder perspective that has been most of the Resident Evil games after the 90’s period. New Resident Evil 2 offers the basic control options, but also the distance of the camera from the character. I don’t know if any other game has this, but for me this is first time I see it, and I became quite fond to it. It also offers aim-assist for players who can’t aim well or having difficult situation in the game, naturally I didn’t use it.

I would’ve like them to be able to kick or push zombies in case of an emergency, or something like that. The gameplay offers items that can be used in these situations, such as knives or grenades. The controls felt clunky when trying to avoid things, but, realizing this is true to the original, while still being a new game. Moving slowly and clumsy gives more feeling of horror and panic as the characters what mostly being at. In the second playthrough (Leon) I got used to the controls and learned to avoid enemies and bosses attacks much more efficiently. The bosses were actually easy after learning their pattern and attacks and my character’s movements, too. The item box is back with nothing been changed with it, which is good choice for the gameplay. Player’s item slots are limited, but can be added more slots by finding fanny packs, which is totally 90’s. Even though, it still bizarre how a gun and a key can take same amount of space, but with that we’re even deeper in the 90’s :)

What comes to the zombies and monsters, they take many ammos to be finally dead. This is maybe the most scary aspect of Resident Evil 2; the feeling of helplesness as it feels like the monsters are never really dead and you’re short of ammo. I aimed to the head and still they were moving. The part where zombies got injuries as you shoot them and could be coming at you even when put in half, was very well done.

What gameplay mostly consisted was solving puzzles, killing zombies and monsters, running away from Mr. X (and collecting items as you go and if you missed something, then keep running and do another round), trying to survive and enjoy survival horror. Not long ago I read the Resident Evil 2: City Of  The Dead book written by S.D. Perry. It’s not literaturelly well-written, but it gave me vivid images of the places that are actually very unclear originally. Resident Evil 2 environment is very much as I imagined in my mind; cold. wet, dark, gloomy and chaos everywhere.

The graphics are stunning. Capcom has refined the RE Engine that was used first time in Resident Evil 7. At the time it wasn’t perfect, but now it’s the other story. The remake is highly detailed and as Capcom said; they tried to make the grossness via wetness. It works. All the wet blood and pieces of zombies and monsters looks yuck.

The HDR was one of the worst I’ve seen. All the blacks were bright grey and there was no darkness in the game. Then I turned my TV settings “black adjust” to very low and the image changed so much that I couldn’t believe my eyes. Then it looked stunning. Blacks were deep and colours even. Then it worked as I think it was meant to. If anyone is reading this and having the same issue, just tweak your TV settings. The image quality changed from the 1/5 to 5/5. In technical part it still had issues such as a weird blurrness that sometimes took over the whole picture and sometimes just part of it. Other thing that was very noticeable were the bizarre reflections on surfaces. They looked weird black pixel mush and from afar I sometimes thought there was water on the floor. These are just little details, but still sticks to the eye.

This is one of my favourite part of Resident Evil games; the background music. It’s very memorable and unique, and not just some basic stuff. If Nintendo has Super Mario theme music, then Playstation has Resident Evil, that’s how good it is. In this remake the music has been completely remade and not just being remastered. It might sound different, but it’s completely recognizable.

Sound effects were great and detailed, with disgusting wet splash noises when shooting zombie’s brains out or limbs off. The sound effects came always from the right place and the effects made me wince. All the audio is made to match what you see, and I like these kind of perfectly done details. I used Playstation Gold Wireless Headsets with the volume pretty high with the surround on and in the in-game settings I didn’t use ‘headsets’ I chose ‘7.1. surround’ and the binaural setting on. It made everything so much more better. It’s always difficult to select these options in-game such as headphones since it’s unclear does the developer know what kind of headphones player uses. Is it simple 2.0 stereo or wireless 7.1. That’s what the issue always is when I try to put the settings correctly and just trying them is the only solution. I played this twice (Claire and Leon) as Normal difficulty (from Easy, Normal, Hard options). The game offers lots of ammo which usually makes everything easier, but the zombies takes many bullets to put down. I was worried it would turn to be just making a monster mush and sometimes it was, but learning to shoot at zombies head made everything so much easier. There were times when I was absolutely out of ammo and I had long way to go through zombies and monsters, so it became avoiding and luck.

The bosses were fun in the second playthrough as I learned how to deal with them. They had special way to be taken down and not just shooting them with all your might. What was the most scary and difficult to deal with was Mr. X. Goosh, it was nerve-racking as he came at you fast and always managing hit you. It was pointless to shoot him so avoiding and listening his heavy footsteps, and trying not to be loud, helped to stay unnoticed. At times I was hoping the option to hide would be better than running back to the save room (where monsters can’t enter.) It would’ve made the gameplay easier, but the idea hiding in lockers is very used, though. With Normal it was challenge at times and if you try to run and leave zombie behind, it’ll follow you through the door or you’ll face unkilled zombies as you return to the area. I believe the Easy difficulty is for someone who just wants the story. The Hard one will have challenge for an average player, or even advanced one. It’s always difficult to say since everyone has their own skills of playing, but with my reviews I always try to tell the point of view of ‘an average everyday player’. Sometimes Resident Evil 2 was looking at the map and trying to make a plan where to go and where not and what detour/shortcuts should be taken. It was surviving all the way with having easier and difficult parts. Goosh, I wrote much, but I had lot to say. This is my favourite game series and my favourite game of it. I can see myself playing this more than two times. If anyone hasn’t played any Resident Evil game before, this might be the best example what the series is about and how it started. Many player might be confused of the complete differences that Resident Evil games has with each other, but Capcom have come a long way from ups and downs, and maybe they have finally found the right way since this piece is spectacular. It still felt to be too faithful to the original, but I understand that. As Capcom said, they made this game because fans were asking and hoping it numerously and if changing the remake too much it wouldn’t even be the same anymore. There’s many aspects of this game that are considered as outdated to nowdays standards, but this is a remake of a game from 1998, and staying true to it takes sacrifices.

The original Resident Evil 2 would be proud. 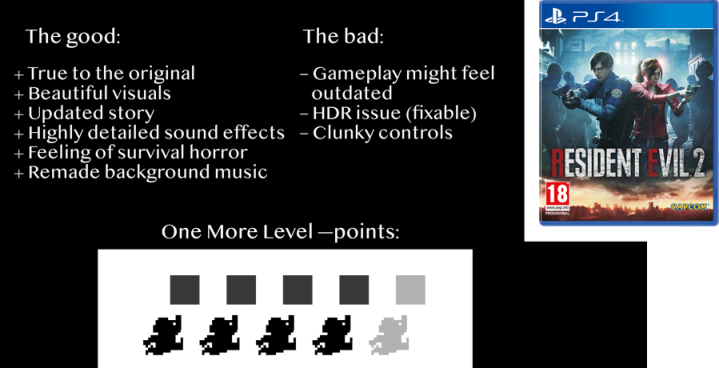