It was a little hassle to get Untitled Goose Game under my review. It was supposedly to be published on PS4 at December 17, 2019, but it was nowhere to be found in the PS Store. It was also missing in some other EU countries. Before Christmas I contacted all possible places and finally got the answer. Untitled Goose Game is coming, but with some minor legal aspects it was unable to be published in certain countries on time. I just now checked PS Store and the goose game was still missing in Finland’s PS Store. I, luckily, got a review key to the game, but I had to use my UK account to download it. It worked fine on my regular account and, yeah, that’s about it.

[Update: House House has tweeted, that the game should be available in Denmark, Finland, Norway, and Sweden on January 3rd (and more countries very soon after that).]

The evil is born

Untitled Goose Game began very much like some very old game that doesn’t have any introduction to the story or game world. I was hiding in a bush and after *honking* I got myself out of there. I began to walk onwards through the little wooded area and prompts told me all the moves I can do, until I was swimming in a pond and found my way to a farmer’s little garden plot. 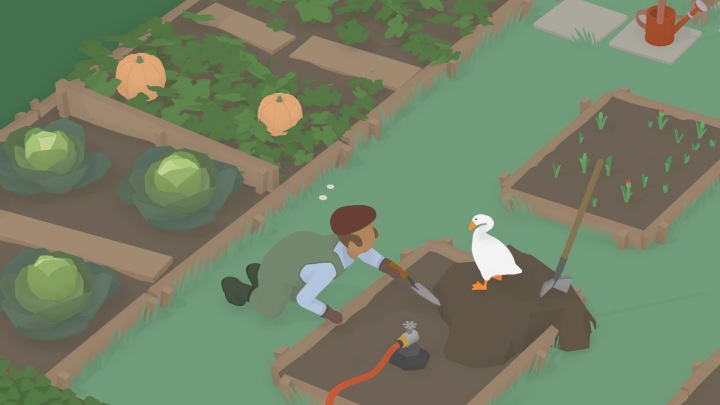 The goose have a list of tasks what he have to do in every area, and for example in the beginning I had to find my way into the garden, then steal some items, steal gardener’s hat, *honk* so he’ll got scared and fell. In some other area I had to steal from flea market and make people to do certain things by creating situations behind their back. The solutions to puzzles weren’t complicated, more of fun than frustrating. But, after getting new areas, the old areas with numerous items left behind might little bit confuse the player. At least in my mind was all the countless items that I could bring and try on a new puzzle, but I didn’t want to do that. I realized that the puzzles are meant to be solved within the area with its items. If player somehow manage to lost item(s) or do some other errors, that certain area can be restored.

Too near to the people the goose couldn’t go or the item it’s holding will drop or the human takes it, and then it becomes a fight who can have it. Running away from the humans were easy, but if running a long distance the human was always little faster and caught my goose. There was no punishments, such as restarting an area or death, which was nice. I think the game getting PEGI 3 rating was due to that.

It all began from an internet joke

There’s not much else to tell about the Untitled Goose Game, other than it was originally some internet joke that evolved into a video game. It’s very simplistic game, but needs some little playing skills (the controls felt little clunky at times), no voice acting, easy puzzles and overall funny setting. I just realized that Untitled Goose Game doesn’t need any explained story, because the whole gameplay is the story of a mean goose who tantalizes the village people everyday life. The game isn’t very long and I played it in two sessions, altogether 2-3 hours. After beating the game there will be some extra tasks to do :]

Everything in Untitled Goose Game feels like ‘something new’, even if it’s merely a simple game with plain and clean visuals. It’s the setting and overall idea that does it. Anyhow, I do recommend Untitled Goose Game for it being simple and fun, and can be found on many platforms with good price.

“A mean goose who tantalizes the village people everyday life”