I kinda didn’t know what to expect of this game when I decided to buy it. I knew it was some kind of scary horror VR game that tells backstory of the sanitarium and how it came to be abandoned as it was in the Until Dawn —game.
I haven’t played any horror title for a while and specially VR horror and I was kinda afraid to start playing.

I gathered my strength, put the PSVR on and started playing The Inpatient.

I must say the controls of this game are one of the worst I’ve seen in a while. Let me explain.

First of all the positive thing is that there is option to change the ° how much you can turn and also you can choose ‘freely’ which I chose. So couple points for that.
Other thing what I wanna address is the option of using voice commands. I did use that and it means player can speak the answer they wanna choose (one of the two available options) and it works very well. I speak perfect english when english isn’t my native language, and I don’t know how it works with those players who has thick accent or bad english. I had only couple times a problem to get it recognize my choice but overall it works like charm.

Now the negative things.
First of all the character walks super slow. It is like 1/3 of normal walking speed. I have no idea why you can only move like a snail. Is it suppose to add fear? Well if that’s the reason behind it, it kinda works but it is mostly annoying and in the beginning I was OK moving slowly since I was afraid of everything and every corner but soon I got used to the horror and jump scares so I wanted to walk faster or run so I could move quickly. Sadly there is no such button for that.

Your character can also pick up objects and examine them but I don’t know was it buggy or was it made such way since it didn’t work very well. It felt like the hand I was moving didn’t respond my commands and I couldn’t literally do anything with any object I took in to my weirdly moving hand. Even the flashlight what I needed to point forward by tilting the controller it was always pointing 90° left or right so I needed to turn my controller sideways but still try to move forward. That was annoying if something. I tried to reset the picture but with no avail. Also opening doors was struggling and not mention pressing the buttons. Oh my glob how many times I had to try just to press the elevator button. It didn’t took my controller movement and if I’m more specific; the game didn’t even explain to me how to use all the controls so it was kinda my own discovery.

When walking turning was painfully slow and awkward and many times I accidentally turned 180° and that happened all the time because the control choices they made.

So the main controls DOESN’T WORK.

This game has very scary sounds and the 3D sound makes everything ten times more scarier. All the suspicious noises here and there or voices around you talking to you specially when the screen goes totally black and all there is to listen these things.

The Inpatient is happening 1950’s era and the music is from that time period. Voice acting is spot on and very lifelike. If the graphics don’t bring the character to life then it is the voice acting.

The beauty of pixels

I must say this game is beautiful and sharp as hell. Graphics and character design is superior and this is top 3 of most gorgeous PSVR titles out there. Everything looks so real that it makes the game feel more scary than it already is.
Textures are high quality and detailed. Shadow and lightning (that were absolutely stunning in Until Dawn) are one of the most beautiful I’ve seen in PSVR games.

One negative thing I have to address is how dark the whole game is. It was hard to see sometimes and specially taking readable screenshots was almost impossible. 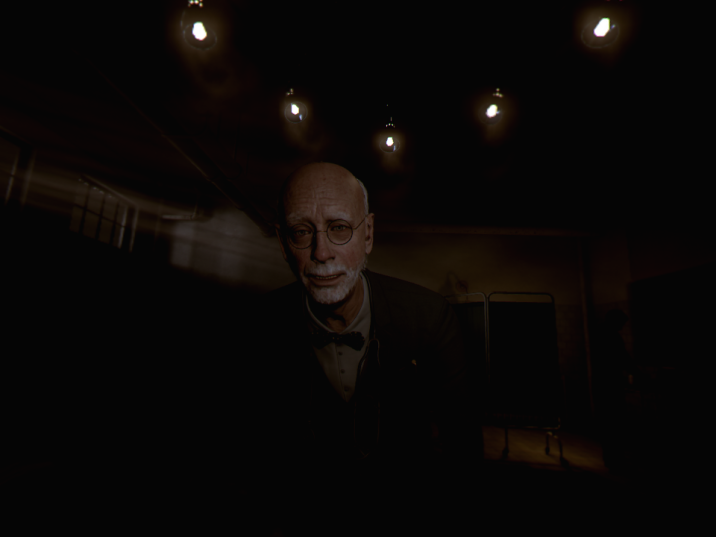 Maybe it’s all in your head

The Inpatient starts with the scene where you are tied up in a wheelchair for reason of unknown. A doctor is walking around the room and talking to you and asking questions of what do you remember of your past and life. As you try to remember there isn’t coming much out of you, you don’t even remember your own name or why you are in the sanitarium in a first place.
They take you to your room where you meet your roommate — another male character. The room is locked so you can’t leave it so all you can do is walk around in a tiny space and talk to the other patient and wait for the nurses to come and do their things.

Soon something happens and the alarm goes off and later you notice how you are left in a locked room and seems like the whole establishment is abandoned except you and your roommate. It is unclear how long you’ve been there but you start to get hungry and paranoid and you see horroring dreams until you finally get out of the room and start to search the environment. You discover that the building isn’t completely empty — there is survivors who are hiding in the building from, as they said, ‘from those things’, Wendigos.

Your main goal is to get out of the mountain, with other survivors, where the sanitarium is. You need to sneak onwards and after different scenarios you come to the end.

The end of this game is variable, as it was in Until Dawn and it changes from the choices you made. My end was that I didn’t get out of the mountain for reason I’m not telling.
However the story of The Inpatient binds it together with the plot of Until Dawn and in the end it comes clear. This game isn’t just some extra shit, it’s more in—depth look what happened in the sanitarium and how those Wendigos came to be in a first place in Until Dawn. Gameplay? I thought this was real life

The Inpatient follows same rule as Until Dawn; the butterfly effect. Which means all of your choices have consequences and the story changes by the choices you make. You have to, not only choose what you say, but also choose your path you are going to.

Along the gameplay you can collect different memories that tells your past and things you remember that helps you to get the whole picture of your destiny.

As I have said before I hate jump scares ONLY if they are overused and this game it isn’t. It is more freaky and psychologically scary. All the voices you hear and those dreams or hallucinations, or whatever they are makes it sometimes difficult to keep your eyes open.

As I mentioned about the controls and how damn slowly you walk it doesn’t make you want to go investigate other areas. It’s painfully slow and it doesn’t add up the horror level, more like annoyance level.
So I decided more to focus staying on the story and finishing this game.

This game isn’t difficult at all. Other than the controls and bugs. It is more like a walkthrough movie where you make choices and crawl onwards like a snail.
You can’t even die and there isn’t any weapons, health or items you can use other than a flashlight. This game doesn’t even include any puzzles so there wasn’t anything that I would call a difficulty. 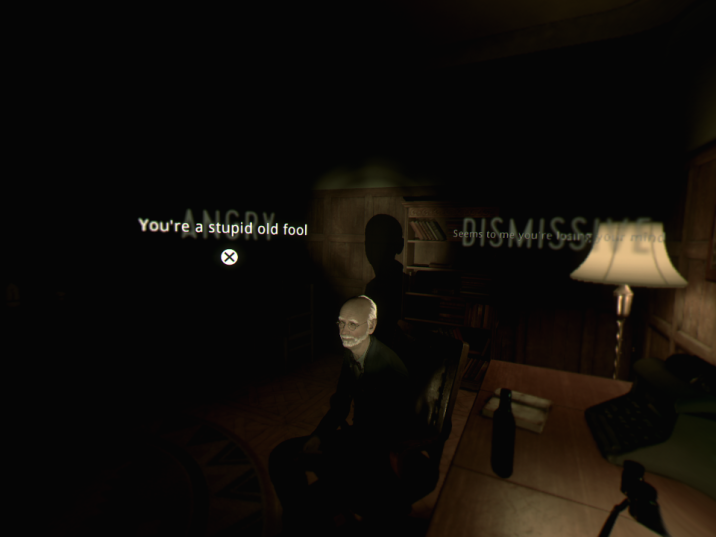 The price of surviving the horror

OK, another piece that is short. Its a movie length approx. 2 hours long but it is replayable, if you don’t mind the slowliness of it all.
For 39,95€ this is expensive I don’t recommend this to anyone else than super Until Dawn fans or horror fans that wants something to experience with PSVR. If I would price this it would be 19.95€
With super awkward and buggy controls this game is kinda annoying but hopefully it is over sooner than you can imagine. Scary it is that’s for sure and the horror atmosphere is present but at least for me, I did got used to it fairly quickly so it wasn’t afraiding me the whole playthrough.
Story, graphics and sound is super good but the slow phase makes me not wanting to play it again — at least immediately.

But when I need some horror in my life then I can always play this through again.

Character design is lifelike and
the game overall looks so real that it
makes it feel more scary than it already is.