Resident Evil is the most iconic game series there ever been. It had its ups and downs, but seems like Capcom been back on track with its well-worn saga if we look back of the most recent installment Resident Evil 7: biohazard which got good reviews. Capcom is back with Resident Evil 2 (remake) demo that is only 30 minutes long and that’s it. You can’t play it no more, it’s like a herb that you used and now it’s gone forever. I have no idea why they came up with this kind of idea? Maybe they wanted it “truly feel like survival”? Whatever the reason is, I think it’s already completely a shit idea. And I haven’t even started the demo yet. 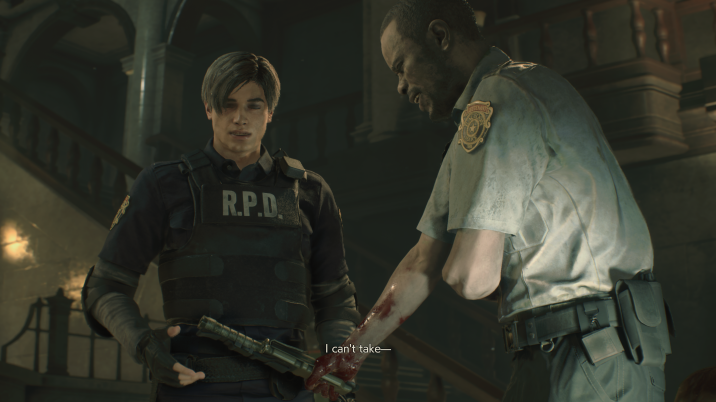 I can’t tell Resident Evil 2 remake’s storyline, since I don’t know how much it’s changed in this re-touch. Overall, for those who don’t know Resident Evil 2 is a second installment of the series and it tells story of Leon and Claire and how they must survive zombie infested Raccoon City. It’s completely chaos out there and no clear path can be taken. Resident Evil 2 demo is set in the beginning of the story where Leon enters the Raccoon City Police Department (RCPD) and tries to regroup with Claire. Leon finds the police station as much of chaos as it’s outside and barely any living police officer can be found.

In the demo I have 30 minutes time to find my way and when I started the gameplay I had no idea where to go or what even to do. I soon find a officer Marvin who is badly injured. I also see Claire in CCTV and a other officer is screaming for help via walkie-talkie. I decide to go after the help needing officer and he dies right after I meet him. Then it’s just running around and shooting zombies and finding a items and puzzles that is left unsolved as this is only one-try and with not enough time. All there is is the exact same material that has been presented by Capcom long time now. Gameplay and controls are very minimalistic. I could shoot, use knife run/walk, collect stuff, heal and use inventor/map. I’m pretty sure in the full game there is much more to it, though. Leon seem to move very smoothly and the aiming worked better than I usually expect from action games. The options were simple and only interesting I could find was the option to choose how far the camera is from Leon.

The demo was so short that I really can’t tell lots of the gameplay and controls as I didn’t have enough time to get used to them.

Resident Evil 2 demo has HDR and its awful. I honestly was shocked of how bad it was. All the blacks and were washed out and grey-ish. The colours also looked toned down too greately. After changing the visual out of HDR everything looked much, much better. Not perfect, but sicnificantly better. This kind of HDR issue is familiar with many PS4 titles I’ve played. Other than that, the graphics looked nice and as Capcom said in some interview that they wanted to show out grossness via wetness I could totally see that. From the perspective of graphics everything was beautiful, but ugly through HDR.

What I loved was how much the zombies could be chopped off. As I shot them they lost so many parts of their body that it looked like they could be put out piece by piece.

All the zombie head explosions to background music I love, love, love. I could easily hear where the zombies were coming from and their detailed and various voices made them unique from one to another. The music brought me back to 1998 and it’s great they didn’t change anything with that.

The game seemed to be fair, not too difficult or complex, but giving 30 minute one-time shot it made everything so hard. I was panicking where to go and when looking the map I was just deer in the headlights. This demo didn’t have any difficulty settings, but I would say in a scale of Easy, Normal and Hard this was Normal. Approximately three zombie bites killed me, but there was plenty of ammunition and I was very surprised by that. I thought this was supposed to be survival horror and therefore I would change this being between Easy and Normal. I’m gonna keep it short. Everything was great except the one-time-30-minute-try, the HDR and the fact that this offered nothing new. I can say I managed to play this 3 times as I used different accounts on my PS4. I have many accounts more, but I think I cheated a little, but I’m making this review only aspect of one 30-minute gameplay. I barely could do anything when the time was already up or see all the available places. If anyone wants to play this demo completely, you should know exaclty where to go and what to do and possibly multiple 30-minute tries.

If they want to give us this little then I can only give this much back since there wasn’t much to try out and therefore make review of. Game OK, demo disappointing.

Participate to my giveaway of Resident Evil 2 (PS4) copy!!