Originally for Nintendo Switch, Pode is arriving to PS4 console. Developed by Norwegian indie studio Henchman & Goon winning multiple awards such as Best Audio, Best Art and Best Casual Game. This surely raises the bar when I haven’t even touched the game yet. Being inspired with Norwegian culture and surrounded with cute story and peaceful surroundings; I like Pode already.

Pode tells a lovely story of a rock Bulder that tries to help a fallen star Glo back home. They go through a mysterious mountain cavern that includes countless puzzles. Together they need to find way out. Without any subtitles or voice acting the story is highly visual. It’s simple enough to understand what’s going on. 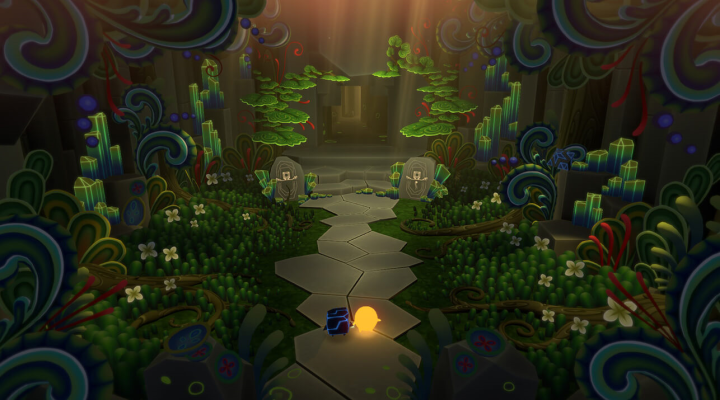 I believe Pode is meant foremostly for local co-op, but can be played alone, too. I only played this as solo and everything seemed to work together perfectly. Glo has ability to glow and therefore reveal things or make plants grow. Bulder, in other hand, can move rocks and press buttons. They also can be used together and with their powers combined there’s Captain Pl… they just get ultimate power and reveal more hidden things. The gameplay in Pode is trying to reveal everything in the caves and solve puzzles that are engrossing. As everything is told only visually, it can make the puzzle solving little troublesome sometimes.

Controlling these two lovers, feels comfortable and as player gets further, more moves are given, which means more combinational moves, meaning more tricky puzzles and gameplay. Pode progress nicely having this kind of settings and would be dull without it. Only thing that I must address is the lack of hints and not being sure is area cleared or not, with this I went back and forth the cave as I was stuck in progress.

Very cute and simplistic graphics suit Pode like hand in a pocket. The inspiration from Norwegian culture can be seen everywhere. Drawings, designs and even plants reminds strongly of Scandinavian culture, where I’m from. Pode looks lovely, but still have seriousness in it, not making all look too childish. There’s so many beautiful scenes that can easily be background images of computer screen.

Winning Best Audio –prize surely went to the right address. It’s not just the nice relaxing background music, but all the sound effects that plays along beautifully with everything. The background music is very minimalistic, which fits to this game and not being overly used.

The progress of difficulty has done nicely as player gets more moves periodically and with that the puzzles and gameplay overall gets trickier. Adding these new elements doesn’t make the puzzles overly hard, but surely they took more time as I went on. Pode is propably best played with someone co-op as then there’s two brains working together.

I know many indie games that have very interesting settings, but with poor gameplay and puzzles kills everything. Pode could’ve easily seen same fate, but how it’s put together is nearly perfect. All the little things shows how polished this piece is. What could be added is online co-op, but I totally understand developers idea of people gathering around and solve the puzzles and riddles together.

I can say with ease that Pode is one must play indie games. It’s mixture of minimalistics that together makes it diverse. That’s why sometimes simpler is better.